Throw Like a Woman / Susan Petrone  (The Story Plant)

As Michel de Montaigne observed, “Obsession is the wellspring of genius and madness,” and the three books being highlighted introduce us into the private and public worlds of obsessions: a woman who breaks the gender barrier of major league baseball by becoming a relief pitcher, an advertising executive struck with a mysterious illness who retreats to die, only to become enmeshed in a sexual relationship that validates the life force she feels, bringing her back to life.  And finally,  a marriage portrayed in metaphor, fantasy and stark reality.  Marriage as obsession. 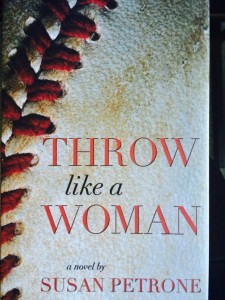 When Adelaide and Sister Sarah commiserate on their marriage prospects in Guys and Dolls, they agree to “slowly introduce them to the finer stuff.”  Susan Petrone doesn’t do slow.  She opens Throw Like a Woman, set in her hometown, Cleveland, with the equivalent of a billboard on Lake Erie’s Shoreway  announcing that this book is about baseball.  “Brenda Haversham’s father taught her how to throw a four seam fastball when she was nine.”  Brenda is no longer nine, but a single mom with two sons, saddled “with cellulite, a sagging rear and a stretch-marked stomach,” and struggling to make ends meet.  Her life takes a turn when she clocks a ninety plus mph fastball in the pitching cage at an Indians game.  It becomes a U-Tube wildfire and ESPN commentator, Charlie Bannister begins the campaign for the beleaguered team (in this case, fiction is fact) to sign her.  Petrone knows the game.  She is co-founder of an Indians’ obsessive website, It’s Pronounced Lajaway, and as Brenda’s life turns upside down when she is signed as a relief pitcher by the team, we get a sneak peek into the locker room and the petty, macho, overpaid players who find her presence unnerving.  But Brenda, intrepid as Brenda Starr, reporter, wins games for them.  As the team climbs up the standings, Brenda also finds herself courted by ESPN’s Bannister.

True confessions.  I’m a latecomer to baseball, but am now a fan.  My husband (diehard Royals fan and it was a good year) taught me to keep score.  I can do the play-by-play from the scorecard.  It’s fun.   I don’t know statistics or keep track of players, but I love the game and enjoy the local Pecos League, the triple A team in Albuquerque (Denver Rockies farm team, the Isotopes, named by popular vote by Simpsons fans) and of course, the majors.  And more full disclosure:  Susan and I worked together at Cain Park in Cleveland Heights, when she was just a squirt.  But that doesn’t cloud my judgement.  This is a well written, lively romp into the world of baseball, yes, but more importantly the game of life.  How we grow, how relationships matter, how sometimes letting go brings the world to you.  And finally,  it’s timely, with 16 year old shortstop, Melissa Mayeux, just being placed on MLB’s international registration list and, of course, Mo’ne Davis’ shutout in the 2014 Little League World Series, Throw Like a Woman paves the way for a game changer.

IN WILDERNESS by Diane Thomas 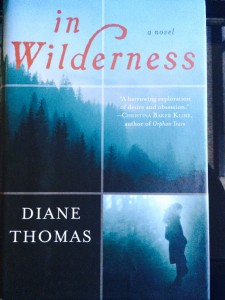 Diane Thomas’ In Wilderness suggests war.  Set in the mid-1960’s, the ravages of Vietnam were emerging and “in country” was settling into our lexicon.  Katherine Reid, a successful advertising executive begins to mysteriously ail, as if her body was at war with itself.  With a medical diagnosis giving her no hope for living, she sells her company, home and possessions to retreat to a cabin for her final days.  An act of control.  She heads off into the isolated Georgia mountains from Atlanta with just enough provisions to last her until the end,  and with grim determination, she settles in only to discover the dying doesn’t happen.  Instead she begins to live.  She plants a garden, notices birds, learns the names of trees she passes on the way to the privy.  The isolation is healing.

We meet her neighbor living in a ruined mansion, a Vietnam vet, Danny, who has also recused himself from the world, in order to survive.  This reader wanted to let Katherine know immediately that she was in danger.  Danny keeps himself on a tight leash but stalks quietly,  observing her illness at the beginning, calling her to himself, “the dead lady.”  They meet.  A strange companionship develops in the forest where there are no rules of engagement, no social conventions to observe, and Katherine and Danny collide unleashing sexual passion and obsession in ferocious, feral coupling.

Like the garden of Eden, life in paradise is not what it’s cracked up to be.  Danny’s inner demons crawl into their shared bed until Katherine is, once again, a prisoner although this time  trapped in her cabin, in a body that now carries new life.

Diane Thomas shifts points of view from Katherine’s sensual, and often astonished, observation of how the world unfolds, after a lifetime of trying to manipulate the marketplace into believing the world according to advertising, to Danny’s desperate mind, as his mental wounds, once they are unbound in the throes of human interaction, return to injurious fury at a world that cannot be trusted.  How do they reconcile?  You’ll have to read it.

Yet another full disclosure.  Diane and I are in the same, very small, writing group.  In Wilderness is written with the same precision with which she reads others’ manuscripts; attention to detail, the request for a clear and confident voice, and an unerring sense of place.  In Wilderness reflects all these with a remarkable menace that stalks the readers as well as her characters.  It has a creepy factor that is mesmerizing.  Thomas keeps the reader on edge, peering around corners, wondering how on earth this story can end.  She brings an authenticity and a fresh voice steeped deeply in the South.  We’ll be reading more of her (her first novel was The Year the Music Changed) and I’m looking forward to it.

LOG OF THE S.S. THE MRS UNGUENTINE by Stanley Crawford 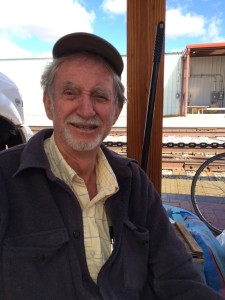 You never know who you might meet at the farmer’s market.  Stanley Crawford owns El Bosque Garlic Farm in Dixon, New Mexico.  While Mr. Crawford is perhaps best known for A Garlic Testament, his fiction and essays consistently receives high, if not glorious, praise.   I bought arugula, and his 1972 novel, Log of the S.S. The Mrs Unguentine.  It stays in print on the list of Dalkey Archive Press, an amazing, dedicated publishing house that elevates deserving writers above the “marketplace value” that diabolically keeps them off lists crowded with the lowest common denominator.  It also keeps deserving books in print.  Like Crawford’s, Log of the S.S. The Mrs. Unguentine. 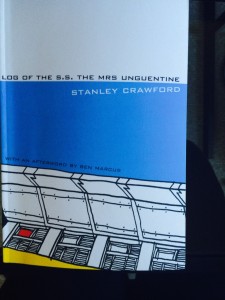 It’s no wonder.  A small (107 pages) book, a strange, imaginative and wholly unexpectedly tender, crazy, poignant and out of this world book.  Mr. & Mrs. Unguentine (a reference to the antiseptic ointment to relieve the pain of life?) live on a garbage barge.  It is a universe.  They have created, during their years at sea, floating in splendid isolation from the world and each other, a self-sustaining world with lush gardens, solar power (this was written forty three years ago), a desalinization system, chickens, ducks, goats and a forest in which each tree has been given a name.  We are reading Mrs. Unguentine’s log of their travel through space, time and the oceans during  a marriage, we know from the outset, is less than perfect.  What marriage is?

If anyone harbors an envious thought of people who sail the seas, the luxurious life of leisure, sipping rum as the sun sets, perish the thought.  The S.S. Unguentine is nothing but work.  The sea corrodes both steel and personal will.  The wind will shred the most carefully hoisted sail and deafen voices within.  The constant horizon, the routine of relentless dawns and dusks will drive you crazy.  It’s life magnified.  And Stanley Crawford magnifies the insanity of living with one person for a lifetime with sly humor, a love of the idiosyncratic nature of human beings, and the waxing and waning of longterm love.

The book is a garden manual.  Even on the high seas, the Unguentines are not immune to pests that invade the vegetable plots, the cycles of the compost pile, the burdens of ample harvests. “Our abundance at times was gagging.”   The rhythm of the seasons gives way to the rhythm of the relationship.  The years of living together and avoiding one another.  Living on the juice of early courtship, is it enough juice to last a lifetime?  There are silences and mutual conspiracies to ignore one another, or speak in code, or renew, with surprising tenderness, a memory of the beginning.

Reading Log of the S.S. The Mrs. Unguentine is like being trapped on-board because its world is so completely real, in all its fantastical inventions and machinations, that we too, remove our clothes and walk among the peaches and apricots, and enjoy the generous spirit of sharing an intimate world, a glimpse of something one rarely sees.

Surprisingly, these are three authors I’ve met.  Not a usual occurrence.  How lucky can a person get?

Postscript.  Also recently read is E.L. Doctorow’s Homer and Langley.  It too creates an insular world as told by the blind Homer, brother to Langley, of their co-habitation on New York’s upper east side.  Chronicling the twentieth century (it begins as Langley returns afflicted from mustard gas attacks) the story of their increasingly isolated existence and paranoia unfolds with heart breaking poignancy, a moving portrait of human longing.  Although there is a disclaimer at the front of the book (all characters are fictional) the story of Homer and Langley Collyer  coincidentally share the same name as brother hoarders of wealth in New York City during the same era.  One is also reminded of  Edith and Little Edie Beales made famous by the film Grey Gardens starring Jessica Lange and Drew Barrymore.

Then I re-read The Elegance of the Hedgehog by Muriel Barbery during one of those unscheduled airport delays.  If you haven’t already, read it.  Brilliant.