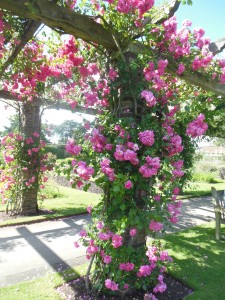 Say “Kew” and a gardener is called to the legendary grounds of Mad King George now preserved as Kew Royal Botanic Gardens.  Thanks to Christina Hardyment‘s fine editing of garden scribes in Pleasures of the Garden, A Literary Anthology, we are able to enjoy a ditty written in the satirical magazine Punch that crowed with delight when women became gardeners at the famous garden in 1896.  Hats off to ladies in baggy trousers who love digging in the dirt.

They gardened in bloomers the newspapers said

So to Kew without waiting all Londoners sped.

From the roofs of the bus they had a fine view

Of the ladies in bloomers who gardened at Kew.

The orchid were slighted, the lilies were scorned,

The dahlias were flouted, till botanists mourned,

But the Londoners shouted, ‘What ho there, Go to;

Who wants to see blooms now you’ve bloomers at Kew?’