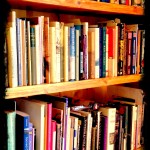 More of your brain is involved when reading than it is when you watch television… because you are supplying just about everything… you’re a creator. (Margaret Atwood)

And she should know…

2014 – currently in progress/on the bed stand

Founding Gardeners-The Revolutionary Generation, Nature and the Shaping of the Nation  by Andrea Wulf (Alfred A. Knopf)